Everyone loves doing custom ringtones. One ring for mom, one ring for the boss, etc. But what if you also put in all the numbers of people you would like to avoid. And give them a custom ringtone too. No Sound. That way, you’d never even know they rang you.

In so many day to day interactions with business (big business in particular), there seems to be so much red tape and no accountability. I know this is nothing new to anyone. When it comes to asking for a donation for a prize giveaway, or speaking to someone directly who can maybe offer a solution…

END_OF_DOCUMENT_TOKEN_TO_BE_REPLACED 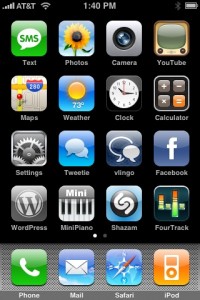 Just by happenstance, I installed Tweetie as my new iPhone Twitter client and am first of all really happy with it. Then I noticed that the logos for both Vlingo and Tweetie look eerily similar in size, and shape. Anyone else notice this? Are they from the same developers or is this something more sinister?

RE: Aligning Social Media with Companies

This Post by Chris Brogan first of all was excellent (read it), but more importantly got me thinking….

He’s wondering where the community thinks tools like Twitter, blogs, Facebook, etc belong in a company. Should they be handled by marketing, PR, HR, etc? In addition to his ideas, it got me thinking about what a huge opportunity there is for marketers, consultants, and agencies to teach clients. I think most companies think of these tools and social media in general as a way to reach out to their user base (which is true). But there’s also a great opportunity to use these tools on an internal level to streamline communication, build teams, and solidify a brand. Check out the full article and my .02 is below:

END_OF_DOCUMENT_TOKEN_TO_BE_REPLACED

Enjoyed this article that got passed to me via Tim O’Reilly – from Truthout.org concerning alternative ways to ‘bail out’ the American people and using this money to instead focus on getting us on track to a greener economy. Good read. Full Article Here. Additionally, my friend pointed out some flaws in the argument but…

END_OF_DOCUMENT_TOKEN_TO_BE_REPLACED

Re: Stories You Can Tell

Read a GREAT post today from Chris Brogan about the importance of storytelling in marketing.  This is also something that Seth Godin beats like a drum.  And I have to agree.  Having  a story to tell, not a pitch, can be so much more effective in getting people to check out your service, your blog,…

END_OF_DOCUMENT_TOKEN_TO_BE_REPLACED

Saw a great article this morning courtesy of Tim O’Reilly about how more and more developing countries are starting to deal less with infectious diseases and more with the ‘lifestyle diseases’ that plague most western countries such as Diabetes, Cancer, Heart Disease, etc.

And of course, obeisity. Did you know that in 2000, there were more overweight people in the world than underweight?

Very in depth article and certainly worth the read. A couple of highlights:

But the second decline in life expectancy is also alarming for today’s Chinese, Indians and urban Africans. This was the decline that hit eastern Europe after the Soviet Union’s collapse. Health services and established social structures fell apart, and stress and depression increased. One result was that alcoholism soared. By 1992, some of the new kiosks along Moscow’s boulevards sold a liquid advertised as “100 per cent alcohol”. Other Russians drank eau de toilette or medicinal alcohol. In 1990, the average Russian man’s life expectancy had been 64 years. By 2005, it was just 59. A study published in The Lancet last year, conducted in Izhevsk, a typical Russian city, between 2003 and 2005, showed that 43 per cent of all deaths in men of working age were due to hazardous drinking. If these figures were extrapolated for Russia as a whole, it would translate into 170,000 excess deaths a year in Russia for men aged 25 to 54.