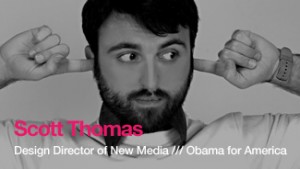 Over the weekend I was in NYC to attend The 99% – a conference that focuses not on the 1% inspiration, but rather the 99% perspiration that it takes to make an idea happen. The 300 + crowd got to chill at the Times Center and hear from a pretty incredible lineup of speakers on the first ‘content day’, then engaged in different activities that were going on around Manhattan.

Though everyone’s talk were great (except Jill Greenberg unfortunately – she gave one of the most awkward talks I’ve ever heard, but did show photographs of monkeys and crying babies), I want to take a few posts and highlight the best of the best, as well as some key points which were generously donated to me via @rararararachel.

I want to start with Scott Thomas, who was the Design Director of New Media for the Obama presidential campaign. Scott was incredibly articulate and I got the sense that he was still overwhelmed by what he and his team accomplished over the campaign.  Essentially, they created what was the most effective online political campaign and outreach effort in history.

He likened working for the campaign to ‘building an airplane while you were having to fly it.’ There was no learning curve for their project, and though there were many many good ideas, it was important for them to realize that not all ideas need to come to fruition.

The Message – There were a couple of main themes when Scott talked about executing their brand and their message.  The first was that they wanted to convey both the historic nature of Obama’s campaign as well as show a message of Hope,   They blended traditional imagery of campaigns with what he called ‘instant vintage’ (like placing some of Obama’s remarks on paper that looked old and important (think Declaration of Indepedence).  This style would be present throughout Obama’s online (and offline) collateral.  It was this visual discipline across messages and mediums that allowed the campaign to combat the accusations of inexperience which were thrown their way.  As Scott put it ‘through consistency of design can you show experience and a sense of balance.’

Yes We Can -One of Obama’s huge strengths during the campaign was his engagement of his supporters nationwide.  His eloquence in oratory combined with the excitement of his candidacy and the message of community allowed for a perfect storm of engagement that the campaign took full advantage of. Scott talked about how there was a conscious effort to make the message ‘We, not He.’ For instance, there was a large asset page that contained branded artwork which was accessible to anyone with a web connection.  It allowed the community to take initiative and control of the message while still keeping a consistent visual.  The campaign could ‘triage’ ideas within the community in real time to see what people thought worked and what didn’t.  Local campaigns could adapt official artwork and blend it with a custom and effective message and use it on the ground in their own communities.

One huge takeaway for the group was an example of how to know your community when designing their online brand.  In short, they found that people HATE long ass forms.  They also hate giving away all sorts of their personal information.  Thing about how many times you have left a site because of the length of the form you were required to fill out, or the information they wanted to collect from you.

Instead, the campaign would make all of their forms and data collection pages simple.  Step by step.  They asked only one question at a time.  Only after completing that one question were you able to go on.  This did a couple of things.  It didn’t reveal the whole form at once, which may have stopped some people from leaving their info.  But more importantly, by using step by step forms, the campaign could see where people abandoned the forms or had trouble with providing an answer to a particular question.  They could then go back and tweak their data collection to where it was an exceptionally user friendly and not-too-invasive experience for the user.

It certainly was evident to me that Scott was a remakable individual, working with other remarkable individuals, to pull off something completely remarkable.  His passion for engaging people and executing was infectious. And I think that this kind of a Web 2.0 campaign was a natural fit for Barack Obama.  It just wouldn’t have fit with anyone else.  The historic nature of his campaign as well as his ability to connect with people, needed a campaign that was run in a new way, and that could connect individuals and groups on a massive scale.  I just coulnd’t see this kind of energy generated by John McCain, no matter how good of an online team he may have had.