Food and Wine – and Food&Wine 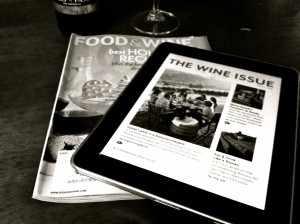 I need to start out by saying that I’m a big fan of food and wine. I’m also a big fan of Food & Wine (the magazine). The the past couple of years I’ve enjoyed just about every issue that gets flung on my doorstep and have loved trying my hand some awesome pairings (thought I wish they’d focus a touch more on the wine then they do now).

But with declining circulation, ad revenues, and eyeballs shifting online, publishers seem to have gone bat-shit crazy when it comes to the digitzation of their magazines. I love my iPad and I think that device presents such a unique format that is PERFECT for magazines to move towards as part of their overall digital strategies. I’ve tried GQ, Wired, and Food & Wine on the iPad and to a certain degree they are all missing the mark (especially when it comes to subscriptions and pricing – but another problem for another post).

I just want to highlight a couple pieces of low hanging fruit that could really separate Food & Wine from the rest of the pack (I’m picking on you beccause I love you, ok?).
First and foremost, the layout of the iPad app for Food and Wine is killer. I love the way that they have integrated video and other interactive content into their stories and features (step-by-step video guides with Mario Batali were a welcome addition).

A major opportunity that they are missing (as well as countless other publishers) in their iPad and AND their print edition would be the integration of a simple QR code on every recipe or article that allows me to scan it with my mobile phone to download the recipe, share the content with friends, or just let me save a shopping list of ingredients. I’ve seen it done with cover stories, but magazines should take the golden opportunity to extend their reach and conversations from a print edition to the web via engaged users. If it’s good, we’ll share it.

Food and Wine I think does a decent job with their Facebook community and I actually look forward to their posts with recipes in them. They obviously have a foot in social media – but I think that they could get exponentially more mileage if they just connected the different parts of the magazine into a seamless, sharable experience. The iPad app shouldn’t be a separate beast from the magazine or the Facebook page. Let readers showcase their recipes, rate the ones that were in the magazine and most importantly share everything!

The publishing house that gets this part of the strategy right (along with the pricing – god knows that’s important) should have no problem succeeding in this media environment. It’s not goign to be about having the flashiest app – because it’s not about an app – it’s about integration of great content across mediums and community. Period.