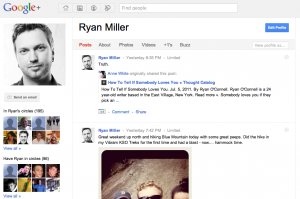 I’ve been playing around on Google+  for almost a week now and wanted to add my list of opinions to the millions that have already been thrown around the web so far. If you haven’t checked it out, I will say that it is NOT a Facebook, nor a Twitter killer. Here are my top takeaways from toying with the service:

1 – Seamless integration with your Google Account. I see Google+ as being a killer app when it comes to social media for teams or small businesses. The ability to share content within small circles as well as jump between group video chats and have your Google Docs at your finger tips is very cool. I’m sure Google is counting on the adoption not just to grow the + network but also to get more people to switch to Google Apps.

2 – Making you put your connections in a container as you connect is helpful. Bigtime. I feel like Facebook for me has turned into me sharing content with a large network of people, whom I know in very different capacities. Some people might love the Social Media content, others may hate it. And I know I can put friends into Groups on Facebook – it’s just too much work for me at this point. With Google+, you have to add friends to a circle (friends, aquaintences, work, etc) as you connect, making sharing and grouping much more manageable.

3 – Google hangouts has smoked Facebook video chat. The client is super light, easy to use and though we may not use group video chat much, I think more and more people will use Hangouts as an easy way to do video conferencing on the cheap. iChat was the best experience I’ve had so far, but now you’re removing the requirement to have a mac.

4 – No one is here. It’s nice to not be bombarded with brands or businesses or tons of people who want to connect at the moment. I feel like I’m very much in control of my network. We’re still defining the follow etiquette here but I don’t feel at all compelled to follow everyone back that adds me, especially if I don’t know them. Or, you can always add people you don’t know into a separate circle and share only what’s appropriate.

5 – Conversation: For whatever reason there’s a ton of interaction here. Way more than Facebook or Twitter from what I can see so far. Being able to see all the comments on a post makes it easier to jump in to the conversation instead of using @replies where you only see the pieces you’re involved with. Very cool so far, but will it last?

1 – The population of Google+ right now seems to be almost all techies and marketers. Makes sense though since we love anything shiny and new, so we’ll move first but that has some major downsides right now. There’s a lot of noise. I see a lot of duplicate posts throughtout the day – way more so that on Twitter or Facebook and it’s distracting

2 – Conversation: No threaded comments make popular posts from folks like Robert Scoble and Chris Brogan eat my feed and take up real estate several screens deep. I wish we could see some threaded comments soon, or that the system would recognize that if more than 3 people have shared a post that are in my network, I only need to see it once.

3 – Lack of a Filter: I do like the idea of circles and the way following works on Google+. I can follow whomever I want and they decide whether to follow me back or which circle to put me in. However, what would be awesome would be some sort of application process where I could filter content from certain people. For instance, I wish we could create tags for each post we share (generic tags, but that were available to those who are in our circles). That way, the people following us could choose only the topics or tags that they want to follow, instead of getting a firehose of content and comments.

4 – Search: I don’t feel like there is a good discovery engine for meeting new people or jumping into topical conversations yet. Twitter is certainly the best at this (or at least they were until searches became filled with brands trying to sell things based on keywords). Maybe I’ve missed it but I haven’t found a good way to meet NEW people yet on Google+.

5 – The pace: I’m still in love with Twitter’s ulta fast pace of information and being forced to get your point across in 140 characters. It’s super easy to meet new people, share content and interact publicly – which is especially key for businesses to show that they can do online customer service. Google+ seems like it’s easy to follow people but not as simple to jump into a conversation then get out. That may change as more people get onto the service and start tailoring content to different circles, but for me I’m stil a Twitter diehard.

Bottom line? I like it. I think it has real promise, especially for both business networking and tailoring content towards certain groups. It’s great way to keep your personal separate from your professional (if that’s what you want), while maintaining different levels of connections – but on the same network. Honestly, I’ve already started using Facebook a little less (not giving it up yet though). I’m also very curious to see what the opportunities for brands are going to be.

So what do you think? Are you on Google+ yet and what are your first impressions. How do you use it differently than Facebook or Twitter? And what’s the thing you like the most and hate the most about it so far? Fire away in the comments!