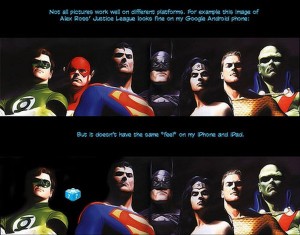 I, like many other iPhone and iPad users am still disappointed that Flash still hasn’t made its way onto those devices. Yes, I’m aware of ‘Frash’ but the big thing that’s missing in that package is the ability to play Flash Video – which is really all I care about (#iwantowatchTheDailyShow).

But what I’m really sick of is the whining on both Apple and Adobe’s part. Apple complains that flash is a closed, antiquated system (see Jobs’ open letter – Thoughts on Flash), and Adobe complains that basically Apple is the one who is using a closed system and basically doesn’t support Flash out of a grudge – and they’re moving on.

Hey Adobe – have some faith in your users. It amazes me that Adobe has just thrown their arms up. If they believe so strongly in Flash’s need to be on iDevices – just build it. Build it as an app or a plugin. And let the market decide (I can’t believe I said that, being a bleeding heart liberal). As someone who helps develop websites and other web based solutions, the lack of even a public beta also makes me less likely to suggest anything Flash based to clients. I recognize how many flash-disabled devices there are out there and by giving up plans to develop a solution, Adobe also is not giving anyone an incentive to continue to use their technology.

Between the U.S. Copyright Office officially sanctioning jailbreaking your phone and the ease at which you can do so thanks to jailbreakme.com – there’s now nothing preventing you from (legally) getting your iPhone to run flash. Just Adobe (well, and a little bit of Apple).

There are also plenty of avenues for distribution via Cydia or Rock that could bring an official Adobe Flash plugin to millions of users, should they choose to install it. Hell, I (and I’m sure many others) would gladly fork over a few bucks for the privilage of having flash capability (especially on my iPad). For the first time, Adobe could actually make money by distributing what has traditionally been a free plugin.

So I guess this is my open letter to Adobe. Put your money and your devs where you mouth is. Don’t take your ball, whine and go home. Like any other business, if you build a product that kicks-ass people will download it – they’ll even tell their friends. Again, have faith in your community. If Adobe truly believes that they have a great product, they should stand behind it and let the community decide. Maybe if they build it, we will come….and download.