Has Gary Vaynerchuk Sold Out? 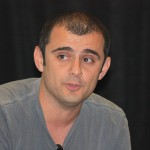 Everyone keeps reading about social media.  That’s the buzz word in much the same way that ‘blogs’ were a few years ago (wasn’t it picked as Oxford’s Word of the Year?).  And the million dollar question is how does someone monetize it?

I’ve been following Gary Vaynerchuk for a while now, first as a huge fan of WineLibrary TV but now I’m a huge fan of his Social Media and Marketing chops.  He shares a lot of this knowledge at his own website and if you’re getting into social media, or just want to be inspired to go out there and crush it, I’d highly recommend it.  I think Gary is a prime example of how you can take something you’re really passionate about and monetize.  Hardcore.  BUT I think its a winning combination of his work ethic, business knowledge and personality that makes him successful. There’s no magic bullet here, folks.

And now he’s taking another step making more dough-nuts than ever before as I read that he’s working with Virgin Airlines to provide in-flight content.  He’s also launched Obsessedtv.com which is an online talk show aimed at 25-55 year old women, and has plans to diversify even more.

He’s done a great job in taking his traffic and status as a web celebrity (though he’s say he’s a Z-lister) and leveraging that into building his own brand and diversifying.  Certainly not the only way to monetize, but it worked for him.

So is that selling out or diversifying?

First of all, its monetizing.  2nd of all, diversifying is probably a smart move given how fickle web users are and by partnering with ‘bigger business’ and creating other outlets it certainly will expose his content to tons of new people.

But here’s where it gets complicated.  I’d argue that his fans are so passionate because in addition to putting out great content, he’s accessible. He interacts with his ‘tribe’ on a regular basis and proudly declares that he answers every email personally (it appears this is true, as I’ve received personal responses back to both my inquiries).  He creates a great sense of community.  Wine may be his business, but COMMUNITY is his brand.

And I’m a little bit worried that with this brand expansion, that some of this community will be lost.  Its like when we were one of the first people to get the goods on a great band that wasn’t ‘mainstream.’  you got to see them in clubs rather than stadiums, you could have a beer with them, and certainly they were NEVER on the radio.  And that was cool, because now you are an ‘insider’.  You knew what made them so special and although you wanted them to get known for their art, by getting HUGE that sense of community can get lost.

While I’m really happy that Gary is rocking it in other mediums I hope that he’s careful in how he manages his community brand, and continues to interact in a way that made him successful.  Can he answer every e-mail forever?  Its doubtful, but I hope that he can grow his business while not losing sight of what made his content appealing.  If he can do that, then he can grow without ‘Selling Out.’ And I for one, am looking forward to many more inspriational keynotes, and wine recommendations from @Garyvee.

What’s the lesson for your business?  I’d say for one thing, know that caring about and interacting with customers matters way more than you think.  Forming relationships with them will help to perpetuate growth organically.  Also, know what the difference is between what you’re selling (your business) and what your brand is (how people perceive you and your business).  And finally, dont’ lose sight of what makes YOU and your business unique, even when faced with aggressive growth.  Be the band that plays a stadium like its a club.