Did My Senator Do a Kegstand? 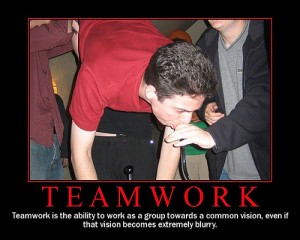 With all the discussion of the changing (and subsequent resetting) of the Terms of Service on Facebook I’ve been thinking about our digital lives and who owns all this content.  And what are the implications of that?

Let’s face it – if you have a Facebook or MySpace or Flickr or any social network account, there are huge swaths of your life that are online and public.  Remember that angst ridden blog your wrote as a college student? You may have ‘deleted’ it, but its been crawled, indexed, and I promise you its out there somewhere.  Think about what that means when you get into photos and videos.  As @garyvee puts it – its your legacy.  Your grandkids will be able to access all this stuff someday.

Where I’m going with this is that in about 10 years (maybe less) we’ll be dealing with the first generation of world leaders and policitians that have participated heavily in social media.  And there’s bound to be tons of digital material that WILL be uncovered related to drug use, drinking, embarrasing photos, videos, and the like.  If people can find Bush’s military records from the 60’s, they WILL find that picture of you streaking across the quad or taking a hit from that pipe (looking at YOU Phelps).

But the other side of that coin is…..will it matter?  Will I care about my future Senator doing keg stands and smoking pot in college?  Probably not.  Will I want to see the YouTube clip?  Maybe. I think this whole era of social networking has huge implications for future leaders and the way that we perceive and interact with them.  Is it an opportunity for us to humanize people?  To focus on policy positions rather than past digital skeletons (since so many people will have them themselves)?  Or will we enter a new age of digital mud slinging and holier-than-thou judgement?

What implications does this have for social networks?  Things are pretty open now, and the whole notion of who ‘owns’ the content that is posted on these services is still a bit gray.  I’d also argue that the uproar by Facebook’s new terms of service had a lot to do with the bandwagon effect – I mean, how many people actually knew or understood the ORIGINAL TOS?  My guess is not many – but it sure is easy to join a Facebook group that’s against the change. Get on the bandwagon people, before it stops being cool! Will we see a higher tolerance for societal transparancy, or will people demand control of their content and increased privacy settings on social networks?

There’s a couple good articles I’ve read about the Facebook TOS scandal by Robert Scoble and Alex Wilhelm, so check them out if you get a moment.

What do you guys think?  VERY curious….