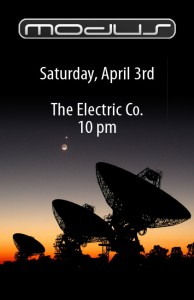 click to be taken to the Ustream Video Page

In addition to geeking-out, I also play a fair amount of music. Besides my solo work, I’ve been playing with a couple of local rock outfits. This Saturday, one of those groups – MODUS – will be doing a show at The Electric Co in Utica.

We thought we’d try to take a different approach to promoting the show this time around to see if it impacts the number or type of people that end up at the gig. So on Wednesday, we did a Pre-show Show, streaming a live performance of about 6 songs from a secret location (my basement) live on the web. The event was promoted on FB and Twitter and we encouraged people to not only tune in, but to interact with each other and the band via the live chat room. In terms of the streaming event itself, I’d say it was a victory for tech and for us. We weren’t sure how the sound or picture would turn out but everything worked as best as could be expected. People even showed up to watch.

This experience showed that with basically no budget (we did have to replace some bulbs in the stage lights), you can create online events that are special and effective promotional tools. We’re hoping to expand this to a monthly event and do more in terms of cameras and better audio.

We’re by no means the first band to do this. But I believe we ARE the first band in our area to attempt it. I guess that’s the message of this post. If at all possible, Be First. And if you can’t be first in the world, be the first in Your world or your audience’s world. You don’t have to be the BEST, right out of the gate. But this approach does a couple of things. You get to make mistakes and refine an approach before everyone else, which means that if you stick with it, the potential to be BEST as well as first will grow. Second, you become an expert. Even if you fail, the knowledge of why you failed is extremely valuable to others who have wanted to try something similar.

Most importantly though, from a business perspective – First trumps Best (at least in the near term). But it also shows a willingness to take risks, a willingness to fail, and the drive to do something that’s unique (however localized that may be).

So… what are you working that is a unique approach to promoting your event or business? Fire away in the comments. Oh, and if you want to watch a recording of the Pre-show Show, click here.